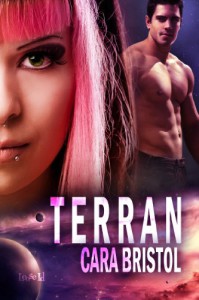 Going back to the land of Parseon, I was hoping to see woman’s right growing. Slowly things change with Civil War on the horizon. They need more heros like Marlix!

Terran is the latest installment in the Breeder series about a planet where men rule supreme through Alpha and Beta designations, while all women are denoted at Breeders. While you don’t need to have read the first book, Breeder, to understand this story, it does give a lot of background knowledge you don’t get in this book.

Basically….Women are only good for breeding and no better than slaves on this planet. The planet Parseon is made up of five regions under the control of five ultimate Alphas.

So we left off in the first book where Dak, an Alpha on the council, has taken a Breeder, Orma, basically in what we call wife. He still doles out spankings and punishments as the Alpha, but he doesn’t see females as he once did. He has set up trade with Terran (Earth). There is a settlement called the Enclave, where men and women go to live to share their lives not like they have on Parseon. But the other four members of the council are not totally on board with all of this.

In walks Marlix, another Alpha on the council, with his beta to the Terran Bazaar looking for fabric that is impenetrable. He is rebuffed by the prepatrious, Tara, but strangely also aroused and feeling protective. When she is brutally set upon by a group of Betas, he takes her away to his region to heal her. Unconsciously, though he knows he will never release her. He battles to accept what he feels towards her to what he has been raised to and fought to uphold in his world.

Terran citizen, Tara, ran from her past to start a new beginning on Parseon only to be kidnapped not only by a bulking Alpha, but an Alpha in charge of an entire region. While she is thankful he helped heal her, she is uncertain what his intentions are and makes a play to escape. Thwarted, she finds herself punished, which she hates but at the same time loves. Slowly she is drawn into a submissive lifestyle that is better than a breeders life, but still subservient to a man.

But Marlix broke a treaty by taking Tara that Dak must answer for. Throw in a council bent on not allowing women to have any rights and a civil war starts to brew. Wracked with indecision on a lifestyle he is brought up to believe in, Marlix is left with hard decisions, uncomfortable feelings and learns we don’t always say what we mean.

This was an interesting second look into a society I want nothing to do with. It is growing and changing and we still don’t know what civil unrest will happen with three councilmen looking at change while two are looking to further the breeder protocol. I am totally for women’s rights, so this pushed me even more since the first book came out. It is not consensual for the most part, but neither is it brutal between Marlix and Tara. Marlix though was a hero I could learn to adore. He never was attracted to the male species and never fornicated with them or his beta. He really only used women analy. Feeling affection for his sister (or breeder by his sire as it is called), he gets it beaten out of him. Alpha, but not the typical alpha. He wants to enjoy life some, but also doesn’t understand not being honest.

I think I enjoyed Terran more than I did Breeder. Breeder was hard because you got to see the life of a breeder up close. Terran allowed you to see a human going into this world. It was easier to swallow…and she does a lot of that too. Overall, a great story and now I can’t wait to find out what happens next to this world.