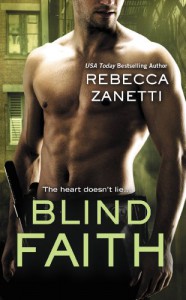 Blind Faith picks up where Sweet Revenge left off. Nate believes he has a child, a child he created with the one woman he has always loved, Audrey. Audrey though is the daughter of Dr. Madison, the evil behavioral doctor that has experimented with all the soldier test subjects. A short love affair between these two five years ago ended when the experiment did and Audrey felt it was the best for Nate without asking him. When Nate and his brothers broke out they set a series of explosions, but Nate didn’t know Audrey was in the infirmary. Years of recovery has been her lot. Along with loving the one man she can never have. But she was the one woman who conceived through all the tests they did on the super soldiers. And now she is marked for many things to come.

Now years later, Nate and his brothers are looking for the codes to deactivate the kill chips in their spines as well as a way to end the Commander and his experiments. And don’t forget their brother Jory is thought to be dead…and alive. Unsure which one it really is. One way into the facility is Audrey who is still working for the Commander through an US Senator from Wyoming, but also Nate wants his child. Infiltrating in could be deadly, but doing nothing is definitely deadly.

These two have a lot to hash out about the past and the future. She gave him her heart and while she retracted it to support her evil mother and the commander, she never really took it back. Nate never really stops loving Audrey no matter how much she trampled on his heart. Misunderstandings abound between these two, but revenge was never really a factor for either of them when they were together. What I loved is how the two didn’t live in the past. Yes, they had history that left its mark on each of them, but they couldn’t deny they still cared. Nate wanted to save her from the sadistic pair while she is hiding her own mission in staying with them. The two came together over and over as the last time, but it was never to be the last time.

The underlining mission to save Jory and find the codes for the chips are what keeps me coming back. With each book in the series I find a new favorite brother to love. Nate elevated himself to new heights with being an adult and not lowering himself to revenge against the woman he loves. This series needs to be read in order as each book builds on the last and you won’t understand what is happening if you jump around.

Nate supports Audrey out of love even if he doesn’t understand her course of action. Audrey supports Nate, but she has an agenda to save both him and her mother. A secret Dr. Madison and the Commander harbor could break them or make them. A fast action story, where you never know who to trust and not trust that left me breathless in waiting for the next book…in March 2015!