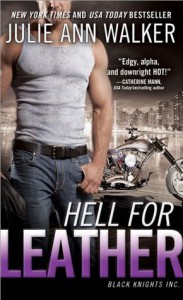 While I love all of the Knights, it was good to see Ghost (from the first book) again. Me loves Ollie and I got my fix of his one line cracks that kept me laughing from scene to scene. Add in a softie biker bar owner babe with at Texan who’s heart is bigger than he thinks. Need a ride? This one is scenic, sexy and keeps your heart running from beginning to end.

Delilah has been lusting after the gravely voiced Bryan “Mac” McMillan, who isn’t falling for her charms the way she would like. When Delilah goes on a road trip with the uncle who raised her, she never expects him to go missing and no real way to find out where he is. Rushing back to Chicago, she enlists the help of the Knights, but especially Mac to help her find him. Never one to let a damsel in distress be distressed, Mac takes on her case and they open a can of worms bigger than what a missing persons report should show.

Now the tension between these two is so thick. They both desire each other, and Delilah is ready to act, but Mac was burned by a fickled lady once and he plans to return to his Texas roots once he saves up enough money. While his body is saying yes to Delilah, he brain respects her to much to offer her a one night stand. Passion pushes them both through out the book. While the love scenes are hot, this isn’t chocked full of them.

The Knights, Inc. series is mostly a romantic suspense thriller that doesn’t always take itself seriously.

Put it all together, add a pinch of I-haven’t-been-laid-in-way-too-long, and what did you come up with? A big ol’ dollop of yeehaw, cowgirl with a side of wanna take a ride?

Well, the characters uncover a plot thicker than molasses and everyone of the government big wigs want in on the mission. One particular group sends in an operative that puts another Knight on edge the entire story. The mystery grows bigger with each scene and the tension builds between multiple characters.

Then throw in some little bit of Ollie…my favorite bachelor Knight who adores 80s and 90s classic bands and couture and you have a story that was a fun ride from beginning to end.