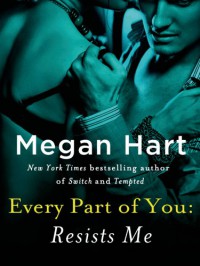 Resists Me picks up with Simone wanting more of Elliott. She dresses sexy and takes him to a goth night club to dance, seduce and hopefully get into her bed. She is a woman who knows what she wants, isn’t scared of her dark desires and goes after Elliott for what she wants. When Elliott won’t dance with her, she goes it alone until a man approaches her and Elliott can’t stop himself from claiming her on the dance floor.

We start to really understand some of the personalities traits of these two. Simone is a bold woman who knows what she wants after years of trying, playing and experimenting. Her ex and fuck buddy, Aidan, is in a new relationship. While she is someone hurt and jealous, she knows she can’t be what he needs, wants and desires. But what she wants in a man is illusive to her, but she senses Elliott might harbor the same desires.

Elliott is a stuck up prick. I will be honest. At this point we don’t know all the story as to why he is that way except of a hint of an abusive father, neglectful mother and someone named Molly who became his mother. He doesn’t understand his feelings for Simone, the draw she has on him. He wants to spank her, pinch her, bite her, but then feels the guilt that men shouldn’t harm women.

They flirt with limit settings, but neither really cross the line to have that discussion. But as soon as their sexual encounter is over, Elliott leaves without a word. Simone lets him go but confronts him the next day in his office with food and coffee. She won’t let things go unsaid and lays it all on the table for him. She likes pain with her sex and he likes what he does to her, but he is ashamed of what he has done and he breaks off any relationship with her.

You get to see a little bit of each of them and learn their stories as this relationship starts to unfold. I really adored Simone. She knows herself, what she wants and where she is going. She isn’t afraid of her desires, whereas Elliott ran from them and generally just made me want to kick his ass the entire story.

Do you think a life with abusive parents forms a 42 year old
man who can’t accept the desire to consensually hurt another person?