A demon, a witch and Lucifer walk into a bar....A Demon and His Witch by Eve Langlais #review 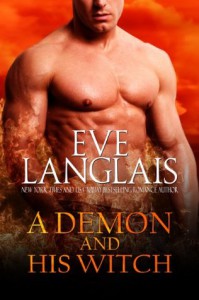 Eve Langlais knocked me over with a wonderfully funny romance between a demon, a witch and the matchmaker, Lucifer. These two (or three) can’t be serious for any amount of time, but when they finally get down and dirty, they blow me away to the damn mortal world. *sobs*

Let me introduce you to a demon named Remy. He is a man whore, loving women and leaving them…and if they don’t leave he introduces them to his crazy mom. Then there is Ysabel the witch, burned at the stake by her lovers mother. Upon her death she made a pack with the devil for revenge on five souls. Then there is Lucifer, who is trying to build up is big badass army after fighting Lilith. While he is truly evil, he does have a softer side for his wife and daughters. But back to the big badass army. Lucifer need more than grunts, so now he is in the matchmaking business so these woefully lovers can start punching out babies.

Now days before her contract is up with Lucifer, the five souls she went after have escaped Hell prison. No one knows who or how they got out, but Ysabel now relives her death each day by burning alive. No damage is done, but she feels the pain of her death. For each day the souls are free, adds another minute to her suffering. Needing a tracker, Lucifer assigns Remy, his best, to help Ysabel.

Remy is one demon I would let eat crackers in my bed. His life of love ‘em and leave ‘em is well, boring. He can’t even believe he’s ready to settle down. And when he meets Ysabel, the sparks fly, but just not exactly the way he wants. See, she has trust issues with how her lover didn’t fight for her in the end and was just using her. So she is in essence a 500 year old remade virgin.

They spare, they duck, they kiss up against a wall and they fight each other to the end, but Remy has made up his mind the witch is his. Oh, *fans myself* I can’t get enough of Remy. He’s everything I want a demon to be and more. Never really serious, but knows all the right things to do to win his woman. Loyal to the end, he is just what Ysabel needs to restore her faith in men.

Ysabel is a bad assed woman that I would love to meet. She takes no crap off Lucifer. I mean the man is in charge of Hell and she gives him Hell as his assistant. Never giving into Remy, she tries to hide everything going on from him, because it’s her burden to bear. But she knows when a good thing is in front of her even if she doesn’t want to admit it.

Oh, and crazy parents make the best in-laws and it doesn’t hurt that Lucifer is in charge too.

This left me laughing and loving through the entire book. Now I really know what everyone turns to Eve Langlais for laughter, passion and a good dose of evil!

If you are reading Welcome to Hell, you know Luciferhas a humungous role in match making.Well, he cracked me up throughout this entire story.So I dedicate Books ‘N Tunes to him withWho’s the Man from the Witches of Eastwick.
paranormal romance 2015 Reading Challenge new to me 2015 books n tunes 2015 literary pickers 2015
Source: http://delightedreader.com/demon-witch-lucifer-walk-bar-demon-witch-eve-langlais-review