Review: Hot for His Hostage by Angel Payne 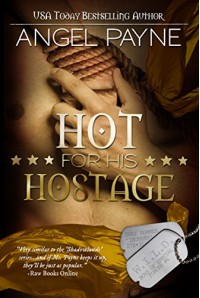 Angel Payne’s W.I.L.D. series has been on my list to read for a long time. I really wanted to get into bad boys, dominant to the heart, faithful the submissives that own them. Well, I jumped in at book 6 and I was prepared to over look the things I didn’t understand that I should have read about in the first five books. So when the book started hot and heavy and I was lost about the airplane hijacking, I let it go thinking the set up came from a different book and I would just flow with it. It worked for a bit. I mean, Shay meets Zoe in the airport bar with her dancer friends who are coming on to him. He helps them get back to the hotel when all the planes are grounded from freaky fog. But he knows Zoe is submissive and he plans on having that one night stand and get back to his undercover mission.

The first night together I was all over Shay and how wonderful he is with Zoe. But when the next morning comes, I am immediately back in confusionville. And this had nothing to do with being lost coming into the middle of the series. See Zoe is on the flight Shay and the bad guys are hyjacking. Shay, or Shane, his undercover name, wears a mask but Zoe finds herself attracted to his voice. He does things on the flight I just felt gave up his cover. Then Zoe faints and we jump several hours into the future and they have landed.

So Shay is undercover to find his mom who he thinks they are keeping to do experiments. Rescuing her is his ultimate goal. Zoe on the other hand is just a dancer in Vegas. I didn’t feel much depth to her character and when they are running around from the CIA I just wanted to laugh. It wasn’t suspenseful or interesting.

Zoe has a group of friends that offered some comic relief. They even stayed in one of the friends mentor’s houses as they regrouped once. Zoe’s younger sister, Ava, is getting married to one of the WILD boys so her story must be one of the five I missed. Throw in Shay’s older brother, Tait, sharing a woman with Kell. I am pretty sure they have a book too. I could see Shay’s best friend Colton hooking up with Zoe’s friend Brynn. It all just felt disjointed.

So most of the book, I was fine with the two getting iy on and connecting. Otherwise I was just plain bored with the rest of the book since it left me feeling lost, uninterested and just not caring what actually happens because I found it all kind of silly. Then at the end, it felt like an abrupt ending. Then flash forward in time. Not really my kind of ending.

There is a paranormal, super soldier element as well. I don’t want to give too much away, but it seemed to come out of left field to smack me in the face. It all felt forced and uncomfortable.